skip to main | skip to sidebar

Powered by Wordpress (if I recall correctly), www.blogpico.com provided an alternative to Blogger as a free AdSense enabled blogging platform.

Now, however, whenever I try and access bookmarks to some of the blogs I followed, they seemed to have vanished, as does the main web site.

I've tried googling, but to no avail. Can anyone shed some light on this? Does anyone know what happened to Blogpico?

Just trying something else...

Bear with me. This is me learning more about Blogger...

Not sure if this will work, but...

Artist Charlie Kratzer decorated the walls of a room using $10 worth of Sharpie markers. Click on the following link (courtesty of momlogic.com) to see a panoramic vid of the results:

Let Kids Draw On Your Walls With Sharpies

Wow, I used to post on my blogs a lot more. I guess my life has been busy! I'm still around, though, so thanks for checking in :)

As irony would have it, when I clicked on my tweeted link for this Adsense post, the ads on my page were about none other than - you guessed it - Adsense. Hmmm.

I've noticed something lately with Adsense that I find a little frustrating, and I am wondering if it's always been this way and will continue.

The way Adsense is supposed to work is that it crawls your site's content and populates your ads with site appropriate content. I find this works well when my blogs are viewed as a hole (i.e. more than one post per page).

However when traffic comes via links to specific posts (only one post is displayed on the main blog page), then the ads are no longer site appropriate. They seem to default to ads for "blogging", which is not what my blogs are about.

If I have a reader arrive from, for example, a link posted on Twitter about a diet post, they're not going to have any interest in the "blogging" ads. They're looking for weight loss information. Those weight loss ads only appear if the reader clicks on the blog header ("home") to generate more posts on the page at the same time.

Is it because my posts are short and Adsense doesn't have enough per-post content to crawl to populate the ads? If you have Adsense on your blog(s), what has your experience been with this issue?

I haven't tried this out yet (but I'm going to). I got this from the "Ask Marc Saltzman" column in the Costco Connection magazine.

If you're looking for a free downloadable dictionary/thesaurus that works with most programs, try www.wordweb.info/free

You hold down the control key and right click with your mouse on the word in question and a small window pops up with dictionary and thesaurus info, including Wikipedia links (which are not there when you use the program off line). The software is 7.4 MB and contains 150,000 root words and 120,000 synonym sets, and is available in several country versions.

I used to go to BC Biomedical Labs, because I had no idea there was an alternative. Then one day I was told about Life Labs by my cousin, (and I swear to God if I ever had another daughter I now know who I'd name her after ;)

What a relief! To have a lab to go to where there is no wait, and the staff is easily as knowledgable as the Biomedical Labs (where long waits are standard).

Anyhoo, if you're like me and HATE line ups and waits, (and need lab work done!) check out their website to find a location nearest you:

I have my eyes on the prize of 10 hours per week with no kids (blissful giggle) this September when my youngest starts Kindergarten, at which point I have every confidence that I will completely fix and restructure my life (cough cough). Meanwhile, I've been setting a timer every day (when I remember) for :15 which I devote exclusively to DECLUTTERING.

I kinda like it. I feel energized when I'm done, like I've actually gotten something accomplished. You can't always see the results, because it is, after all, only fifteen minutes, but at least I know I've done it. I have to be strict with myself to NOT use that time for, say, loading the dishwasher, because that is not decluttering. That falls under the category of mandatory stuff that I should be doing daily instead of surfing the internet.

Anyhoo, just thought I'd share my little success with this strategy. I have no before and after photos ('cause at this point of my journey through chaos the benefits are mostly psychological), so you'll just have to take my word for it...


I have personally tried the duct tape remedy, and although it took a long time, it worked beautifully. My Doc says it's because the tape attracted the attention of the body's immune system, which is what really fought off the wart (not the tape itself).

My mother in law commented recently that she had a nagging wart that she couldn't seem to get rid of, until she got a large splinter stuck in it - then the wart disappeared within days. She laughed as she told me that the next time she gets a wart, she's going to find a splinter and stick herself on purpose. (psst! wake up immune system!!).

So there ya go. It's not the stuff you put on the wart that kills it - it's your own immune system.

Hmmm... there may be a biologial root to profanity after all.

According to this Vancouver Sun article (which I can't find a link to... why is it that some articles are out there for free and others are subscription only?) SIGH

...anyway, according to this article, swearing originates in the right brain, as opposed to most language which arises in the left, and the use of profanity seems to increase our pain tolerance.

Researchers at the school of psychology at Britain's Keele University conducted an experiment where they had volunteers hold their hands in ice water as long as they could while chanting a swear word of their choice. They repeated the experiment, the only difference being the second time around they used a non-profane word. You guessed it - they were able to stand the cold water longer while they were swearing.

(Judging from my husband, it must also help with getting the PDR to record properly, in addition to various other tasks ;)

Fyi, the name of the Vancouver Sun article is: "Naughty Word Helps Make The Pain Go Away", in case you want to try Googling it....

Twice now I've had issues with my laptop battery, which both times have resulted in my laptop shutting down to prevent a power short from destroying my data. I thought I'd share what I've learned, to save other laptop users the same grief...

The first time, the laptop simply wouldn't power up. There was no response at all to the power button, with or without the power cord.

The issue: the battery contacts were not all touching.
The solution: the Best Buy tech simply took the battery out and then powered the laptop up using just the power cord. Once the laptop was running, he inserted the battery and ran a diagnostic on it to ensure that it wasn't faulty. He then told me that sometimes the batteries get moved slightly so that not all of the contacts meet, and that had been the problem.

The second time, there was power to my laptop, all indicators lit up blue and normal sounds from the hard drive, but no response from the screen. I even tried plugging in my desktop monitor, but that didn't work either.

The issue: the battery was over charged.
The solution: again the tech removed it, used the power chord only, and entered some kind of code (or something) to reactivate the screen. He then told me to NOT use the laptop plugged in with the battery in it, while the battery is fully charged. In other words, don't over charge it again.

Doctors In BC Can Self-Prescribe

This is kind of interesting... I had no idea that doctors in BC can prescribe medications to themselves.

“Technically, it is not illegal but self-prescribing isn’t condoned by the College of Physicians and Surgeons..." (Vancouver Sun)

Apparently many physicians in this province have no family doc themselves, so they tend to take care of their own medical needs, which would include writing their own prescriptions. While this would be convenient, couldn't it be dangerous in the case of mis-diagnosis due to lack of objectivity?

According to the article, an attempt is being made to encourage more physicians to take other docs as patients, to help rectify this issue.

It's a tough call: is it fair to ban physicians from self-prescribing when there is a lack of care available for them? What do you think?

What I Did On Canada Day: 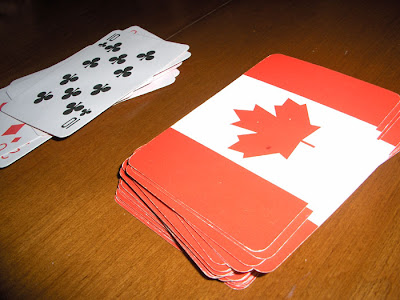